In my previous post, I briefly wrote about what I called the English Round Hand’s “sub-styles”. Today I want to take the time to explain what I meant and show you what those styles are.

In the 17th and 18th centuries, professional scribes had to learn a wide variety of hands because different styles were associated with different functions. They had to use one specific style for business documents, another for private correspondence and a third one for legal documents ; plus every country had their own national hands, which weren’t always legible for the foreign eyes…

In many European countries, the 50 or so different styles commonly used in the beginning of the 17th century made the ability to write a rare skill that only the best writing masters could achieve. However, as more and more people needed to be able to write to conduct their businesses in the modern world, writing had to become less exclusive and only the simplest hands could survive.

At the time, the big European Countries were competing to grow their areas of influence. After the French parliament limited the number of official writing styles to only three, in 1633, the French Batarde (the French trade hand) became very popular in other European countries, including Great Britain, contributing to placing France at the center of attention when it came to trade.

But by the end of the century, the British Empire was growing its own influence, and Writing Masters in London decided that using a foreign hand was no longer acceptable : they had to develop a truly national hand, a standardized style easier to read and faster to write ; a hand that would be used for business, perfectly fit to promote the image of a growing commercial empire.

It is in this context that the English Round Hands were developed in the first half of the 18th  century. I’m insisting on the plural here, because many copybooks do mention the existence of multiple “round hands”.

In 1741, George Bickham included a table of the styles he used at the end of his Universal Penman. Three of the hands illustrated there look very similar : 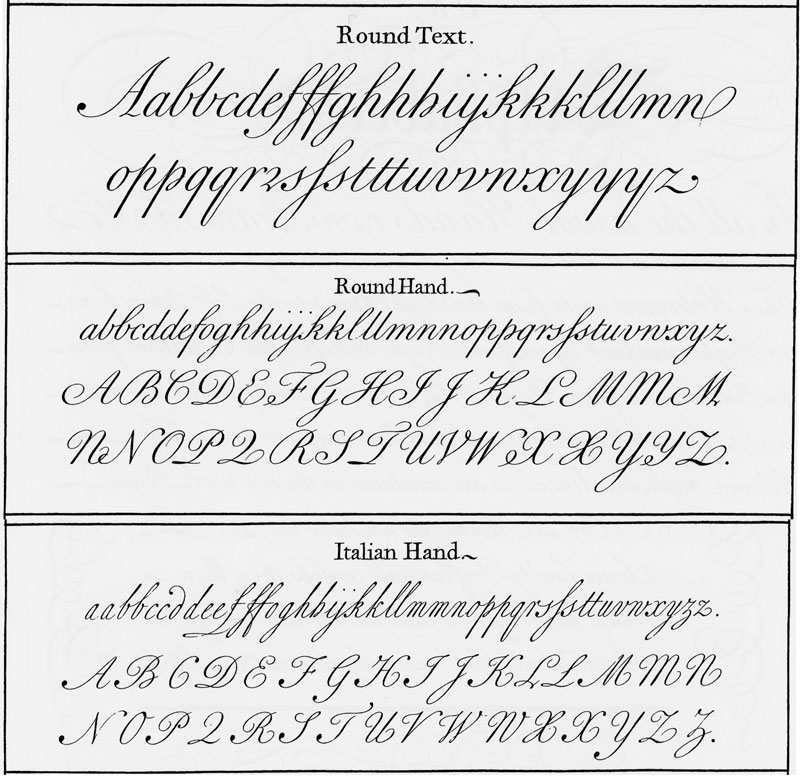 It turns out that because writing was so codified, the style that we now identify as the English Round Hand or Copperplate script was actually a family of similar hands of different sizes and formality, each one used for a specific purpose.

There were 2 formal styles :

1 Handwriting style (handwriting is internalized and spontaneous, it is meant to be written faster)

All of these hands were taught separately, they featured different sets of letter variations and were written using different tools…

The new Round Hands quickly became the prominent style in the Empire, but the older hands did not completely vanish. Indeed, in 1770, Joseph Champion’s son explained that of the 17 hands still taught in Great Britain, only 4 were useful for trade (these are the Round hands) and 3 for the practice of the law – but using these hands was mandatory2Joseph Champion Jr, Penmanship or the art of fair writing, p.5, 1771 ; the remaining styles were only used for ornamental work – in other words for “Calligraphy”.

Today, we use the same nib regardless of the size we write at and all of the Round hand styles have merged into one big confusing style. But I think it’s interesting to learn to recognize each of these styles in old copybooks : by studying each of them separately, we can learn a lot about what makes a script consistent in its elegance or (apparent) simplicity. For me, it also makes the study of copybooks a bit less confusing… Tell me what you think ;)

“Copperplate” : why calligraphers hate the name but use it anyway Pointed or broad… Which is the best nib for Round Hand ?

interesting. I see a form of the Langdon New Copy Book from 1723 still in use in the 1870’s in the US. I have sort of collected common hand-written documents from the 19th-century to study regular penmanship. (more like penmanship as used, rather than penmanship as taught) I have some letters from the 1870’s from a railroad company’s office and one of the documents looks very like this style of writing. Interesting how some styles last long after they’ve fallen out of fashion, or continue to be taught in out-of-the-way places long after they’re no longer in fashion in the… Read more »

The Italian hand is the older than the RH, it was very popular before the RH took over and stayed in use probably because it was so popular… It was recommended for ladies in particular, and I’ve seen it in American copybooks after 1850. Was the document you have seen written by a man ? When you look at the examples I posted, the main difference (aside from shade placement) between running hand and Italian is the fact that the Italian has more curves where the running hand has straight lines… Look at the second part of the n or… Read more »

I’m very anxious to learn the reason why you mentioned that The Italian Hand is” particularly recommended for ladies “. Should you explain it? Thanks a lot.

Hi,
Yes ! The Italian hand was recommended for ladies mainly because it looks more graceful than the more sturdy round hand… Back then, they believed that men had to write a certain way (have a handwriting that reflected male qualities, and legibility was not recommended for some reason), and women had to use a hand that reflected female qualities : gracefuness, lightness of hand, subtelty, legibility… To my knowledge, the only men that used Italian hand were Writing masters… but I can be wrong.

We use cookies to ensure that we give you the best experience on our website. If you continue to use this site we will assume that you are happy with it.Ok