You know I spend a lot of time looking at old copybooks, I love to study these old models and I’d love to help you get better acquainted with old Writing Masters and their works.  But because there are so many options in the bibliography section, I thought it would be nice to narrow it down and share with you my favorite copybooks to study Coppperplate.

Before I start, let me tell you that making a choice was really hard for me. Unfortunately some of my favorite books aren’t digitized and cannot be seen outside of libraries or private collections… Even though it made my job easier, I am really sad to not be able to share these beauties with you…

I won’t list the earlier English copybooks that displayed the first versions of the Round Hand, because I don’t think that these books would help anyone learn anything about the Copperplate we do today… Except of course for the history. If you’re curious about that, you can go to this page and take a look at the works of Shelley and Snell. 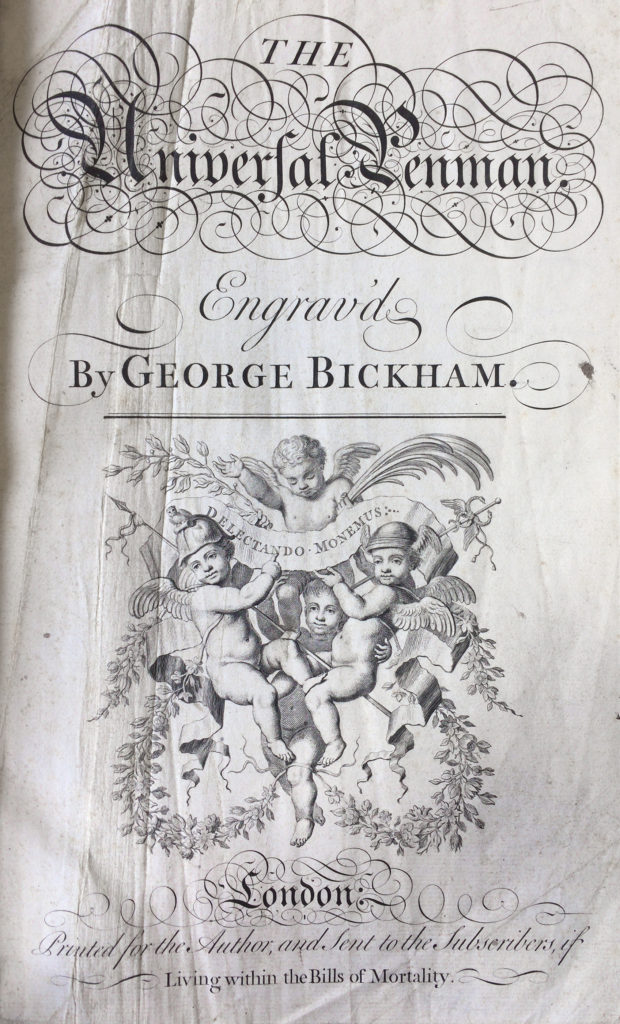 1. The Universal Penman by George Bickham, 1741
This is a must have ! Even though the hands in this book look different from the copperplate we are used to seeing today, this is a real treasure trove when you take the time to study and memorize some of the designs. It can be an overwhelming book to study, though : you will find many examples of flourishes and ornate capitals that will look a bit strange to you, but once you tame them they will transform the way you create layouts and use ornamentation. My favorites pages are the plates showing examples of letters and bills, written with a little more spontaneity, this is where you see the genius of the Writing Masters of the time.
The Universal Penman is Bickham’s best known copybook, published between 1733-1741. The best 25 penmen of the time helped put together these 212 magnificent pages of models in the Round Hand as well as the Italian and Running Hand. This book is sadly not fully visible online, but Dover published a fac simile for a very reasonable price.

2. Youth’s Instructor in the art of numbers, by George Bickham, 1730
This is clearly not a masterpiece of calligraphy, but I like it because it is a less overwhelming introduction into the world of classic “Bickham era” round hand. It will show you some beautiful variations of capitals in the titles and a few simple flourishes that you can learn by heart in a few minutes.

3. Penmanship illustrated, by Joseph Champion and John Bland, 1759.
Joseph Champion and John Bland were both apprentices of one of the fathers of the Round hand : Charles Snell. They both contributed to Bickham’s Universal Penman as well. Their style is really typical of the classic round hand and they both published their own copybooks used to teach and make the English style popular abroad… Sadly not many of these books are digitized and this copy is not of the best quality. But you can still see some really beautiful plates in there. What is especially interesting to me are the full exemplars of the different hands in the Round Hand family (Round text, Round hand and Running hand, see this post if you want to know more about that) 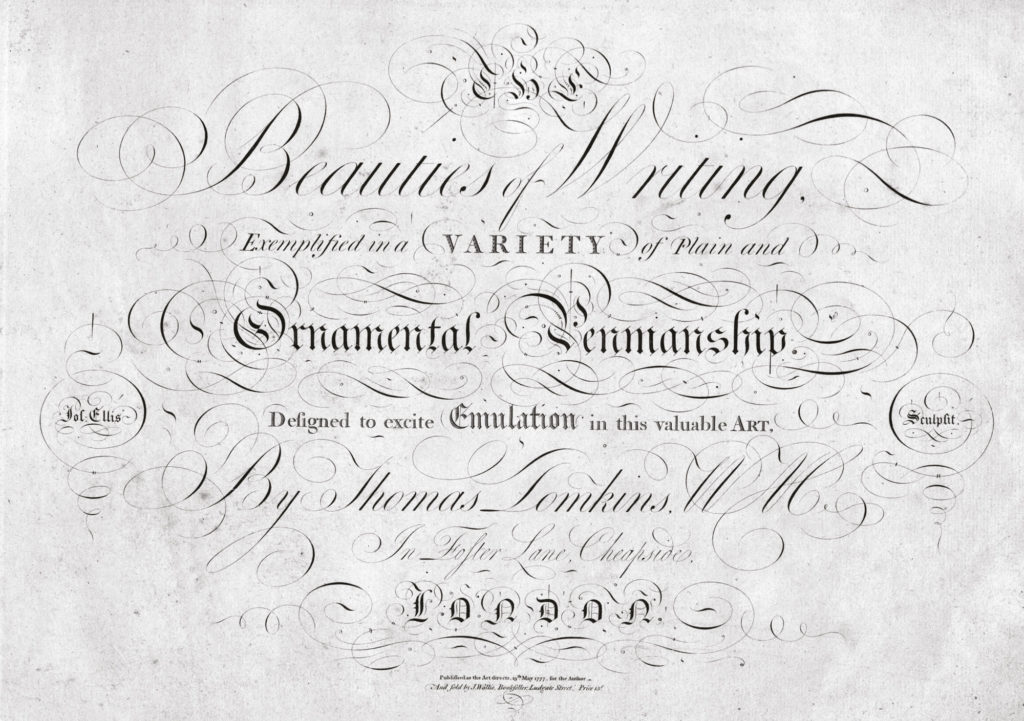 4. The Beauties of Writing by Thomas Tomkins, 1777
Tomkins was a highly praised penman in his time, some commentators saying that he had “attained the highest eminence in his art”. However, as beautiful writing wasn’t part of the recognised visual arts, he had to live with the bitter disappointment of being denied the place he desired at the Academy of Arts. Tomkins’ penmanship looked different from earlier works because he seems to have been using a pointier pen, which makes the contrast between hairlines and thick downstrokes a bit more obvious than in Bickham era books. This makes the models in this book more attainable to contemporary calligraphers who use a steel pointed nib. As Tomkins considered himself an artist, his compositions are thoughtfully designed. You will see more flourishes on upstrokes and downstrokes, but ornamentation is still mostly used to create borders.

5. New Large text and Dutch striking alphabets, with a variety of examples in the hands most approved for business, by Thomas Tomkins, 1785.
This isn’t the same kind of masterpiece as the two previous books I listed. But if you are into Engrosser’s Script, I think you will enjoy the beautifully simple and clean letterforms. This book displays the barebones of the English round hand as it was written at the end of the 18th century. Without all the flourishes, there is nowhere to hide imperfections, and clearly Tomkins wasn’t ashamed of showing his mastery of the pen…

6. The Penman’s Repository, by William Milns, 1795.
Dover reproduced this jewel of a book together with Tomkins’ Beauties of Writing back in the 1970’s under the title Ornamental Penmanship, two 18th English classics of calligraphy. There are many similarities between the two books. However, Milns’ style was a little “rounder” than Tomkins’, and he created more offhand designs as a means of ornamentation. Milns honors past masters like Materot, Velde, Seddon and Barbedor in his pages, and what he created from having studied the works that came before his time is truly inspiring. Also, there is a magnificent page of capitals that you must absolutely know about on page 14.

7. La Calligraphie Taupier ou l’art d’apprendre à écrire avec ou sans maître, by Guillaume Taupier, 1861.
Taupier was a French calligrapher and teacher who perfected his own award-winning method to teach how to write. His “system” became the official method used to teach writing in French public schools. This book is the first manual he published. The style of writing is quite different from what we’ve seen in the previous books : the links between small letters are more angular than in the classic Round hand, which allows the hand to move a little faster (like in Spencerian). But Taupier also allows for a lot of flourished and ornamentation within the writing itself. You will see flourished capitals and more flourished ascenders and descenders than in the English copybooks published during the 18th century… I think it’s a good book to study if you’d like to learn how to add flourishes to your own work.
To open the book, follow the link and click on the small PDF icon on top of the description.

8. Album Graphique, by Jules Girault, 1867.
These two small volumes created by Girault are absolutely gorgeous. Girault, who was also French, was mostly known for his work as a letter engraver, but he was also a very skilled calligrapher. The first book focuses on various writing styles including the 3 traditional French hands and the English round hand, and if you like monograms there is plenty of inspiration there as well.
But it’s the second volume I like the most : it contains magnificent plates of very flourished words in the copperplate style. If you take the time to untangle the lines and study the movements, your flourishing game will be transformed ! This is where I found the capital B I showed you in this post.

9. Calligrafia Inglesa, by Vincente Valliciergo, 1896.
This little book does not display as impressive calligraphy as the ones I listed above. But it’s one of the first copybooks I started to study and it really makes things simple to understand. If you are overwhelmed by exhuberant flourishes and designs, I think you will enjoy the simplicity of the models shown in these pages. I particularly enjoy the two plates that show capital variations, but there are plenty of other things to learn from studying Valliciergo’s style.

10. The Zanerian Manual of alphabets and engrossing, by Charles Paxton Zaner, 1924.
I cannot forget to mention this monument of American calligraphy : I think this is where the particular movements of Engrosser’s Script were best described, and where you will be able to understand the visual differences between Engosser’s and Round Hand.

Phew, that’s still a lot to study isn’t it ?

What about you ? Do you have favorite resources that you study calligraphy from ? Share them in the comments below ;)

“Copperplate” : why calligraphers hate the name but use it anyway

Thank you for creating such a treasure!

I sincerely appreciate your hard work and detail.